Green climate walls and the technology behind

At the Danish Technological Institute in Taastrup, a test version of a new type of plant wall with a built-in heat pump has been built. The purpose is to test whether the heat pump can optimize the life cycle of plants while simultaneously provide a new source of heat for the production of domestic hot water in residential areas.

The test version of the new type of green wall is just over 39 square meters, consists of 300 plant boxes on a south-facing wall, and has a 190 m long piping system mounted to the wall. In the piping system, frost-free liquid exchanges heat with a heat pump, thereby acting as a heat absorber for the heat pump that produces hot water. The idea is that the green wall will produce domestic hot water, as this is needed throughout the year. However, in this project, the heat is simply set aside in an air-cooled heat exchanger 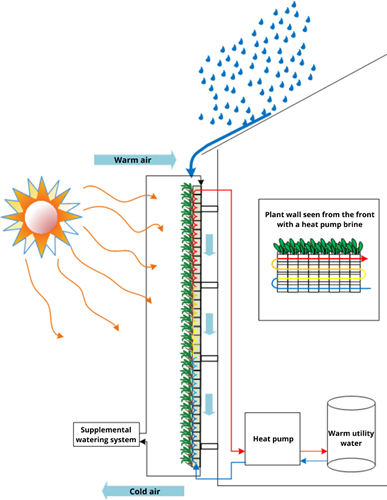 The sun shines on the green wall and heats it up.

Between the green wall and the wall of the building, there is a gap that allows air to pass. As the air is cooled by the green wall, it becomes heavier and falls down. This creates a "suction" at the top of the wall, which adds new air to the back of the green wall.

As rainwater falls on the roof surface, the wall is automatically irrigated. Also, the rainwater exchanges heat with the roof surface. Furthermore, an additional irrigation system is connected to the wall. In addition to ensuring optimal watering of the plants, the irrigation system enables the collection of rainwater from other surfaces including the collection of excess water that is not absorbed by the wall.

In the experiment, the green wall is divided into two. The right side of the wall is cooled (seen from the front), opposite to the left which is not cooled. In this way, it is possible to see and measure the effect of heat being extracted from the green wall, as well as how it affects plant growth.

The wall is equipped with a total of 43 measuring points, which log in frequencies from one minute to one hour. The collection of data is elaborated here.

Learn more about the project, its different elements, and the technologies behind the green walls through five short interviews.